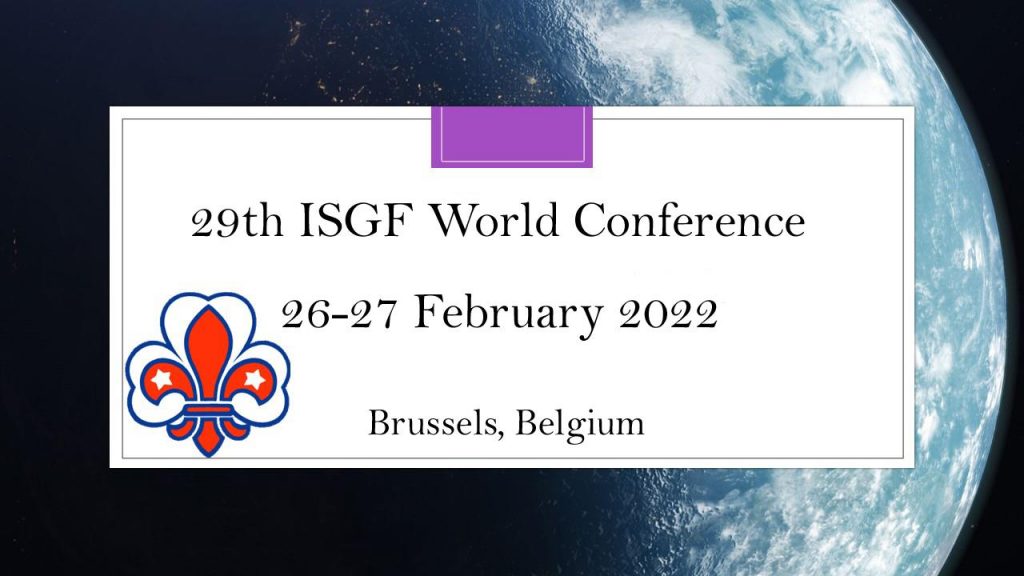 Opening of the World Conference

Introduction Due to constraints on travel world-wide resulting from the COVID 19 pandemic, which commenced in 2020, the Conference was held virtually with the platform party and a small team based in Brussels. During the Conference only urgent official business was presented.

Zalillah Mohd Taib, World Committee Chairman, opens the work of the conference by welcoming warmly all the participants with a video speech: 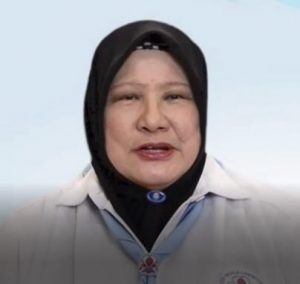 Before I start, I would like to borrow your hands to welcome our new Central Branch group candidates and countries that have worked very hard to become NSGF. It is my great pleasure to welcome you to the ISGF’s 29th and first ever virtual online World Conference. It wasn’t an easy decision and I am glad that the World Committee worked hard as a team to face all the challenges we met along the way. Particularly Wahid Labidi, our vicechair who led the World Conference team and NSGF Spain who put in so much effort for the supposed physical World Conference in Madrid, Spain.

I am grateful to our committee member Elín Richards & ex-officio Leny Doelman who volunteered themselves to cover our Secretary General, Nathalie Henrard when she was on maternity leaves. Without the two of them, many things won’t be able to run smoothly.

I would also like to take this opportunity to thank NSGFs who extended their helping hands and suggestions to help us with the World Conference. Unfortunately, we were not able to take them all as we have many other considerations. All of us had gone through two very tough years! Most of us were or are still affected by the COVID-19 pandemic. The ISGF World

Committee and World Bureau too can’t run away from this unwelcomed pandemic, we faced financial and many other challenges just like all of you. I am sure you have already read from the circulars that sent out by the World Bureau. I seek for your active participation in all the conference sessions with suggestions and feedback. Despite all the challenges we faced, I witnessed the unstoppable force of perseverance from all of you to get through this challenging time.

Most of us indeed preferred to have a face-to-face conference where we could have discussions, updates and share endless laughter together. But the reality hit us hard, there is nothing much we can do about it as there are too many travel restrictions from different countries and of course our lives are precious. We do not want to expose your lives to unnecessary risk.

We had received resolution on environment, lastly a proposition from Norway supported by Sweden and Finland to organize working groups during the 30th conference in 2024 to discuss environmental matters. The topic is sufficiently important to prepare the work of the 30th Conference between now and the conference. I will propose to the World Committee after this conference to create a correspondence group for this preparation.

With that, I would like to inform you that NSGF Spain has accepted our offer to be the host for the 30th ISGF World Conference.

Lastly, I would like to say a big THANK YOU to all our NSGFs, without your endless support, the movement would not have been able to come this far. So let us continue to walk hand-in-hand to a brighter future and keep thriving! Thank you!”

Zalillah declares the World Conference is open and gives the floor to the platform party located in Brussels, in Belgium. The members of the panel are from left to right :

There was tribute to ISGF “gone home” members and a minute of silence observed in their memory:

The Rules of Procedure have been adapted for the virtual Conference. The voting is done with online voting forms. Delegates must click on the link that appears in the chat to receive the voting form. In the voting forms there are three choices: in favour, against or abstain. Once the choice has been made it cannot be changed. For the election of World Committee members, delegates (full member countries) can vote with 3 votes and only use one vote for each candidate they wish to vote for.

Martine Levy, World Conference Chairman, welcomes everyone and draws attention to the unfortunate situation during which this World Conference is held, where Ukraine is being at war with Russia. She reminds everyone of Baden Powell’s quote : “A scout is a friend to all and is a brother to every other Scout” and urges all the participants to think of them deeply and fraternally. She starts her speech “ It is a honour to have been asked by the World Committee to chair this conference and thank you all for voting. Let me introduce our Vice-Chairman, Cécile Bellet (former secretary general) and Nathalie Henrard, our new secretary general, you may not have met her yet but you will meet her later next time. Thanks to them for helping me in this World Conference. My thanks go to everyone involved with the 29th World Conference, and especially all NSGF’s for accepting all the changes that have come about as a result of the pandemic, and I hope you enjoy the new way of working!”

Resolutions of the 29th World conference

The Conference, having received the rules of procedure for the special conference on-line, accepts them.

The Conference, having received the propositions by the World Committee, accepts the following nominations

The Conference having received the draft agenda accepts it

Notes the resignation of this NSGF

The conference also noted the resignation of Hungary

Having seen the videos of presentation of the candidates and read the additional information provided,

Having voted [in secret ballot]

Elects as new members of the World Committee.

Taking note of the recommendation by the World Committee

Decides to extend the present fee system with an increase of 11 percent to allow for inflation; consequently the per capita fees in Euros for the 3 levels of countries based on their GNP will be 2.51, 1.68 and 0.83 for the triennium 2023-2025.

Resolution 9: Amendments to the Constitution and byelaws of ISGF

Note that the consolidated text will be circulated after the Conference

The Conference noted that Spain accepted the proposition from World Committee that it hosts the 30th Conference in 2024.

The Conference noted the difficulties incurred with the accounts. It accepted that the new World Committee would examine the question during a meeting in March and fix a deadline which will be circulated to the membership

Having received the quadrennial report 2017-2021

Accepts the quadrennial report as presented.

Overview of the voting results

Due to the calculation system used by the platform to hold the virtual Conference, the panel had trouble to receive and communicate the results of the voting on the first day. To ensure full transparency the results are presented here: 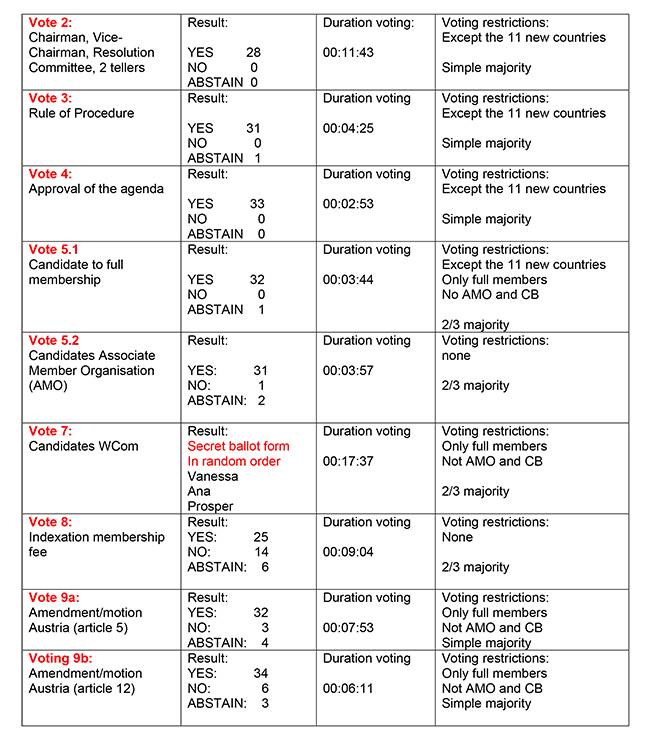